Burger King is getting a huge amount of positive press lately, which quite honestly I don’t understand – not even a little bit.

According to Phillip Thomas, Chief Executive of Cannes Lions and owner of Ascential Events, “Burger King is a brand that’s built a reputation for marketing campaigns that are bold, courageous and innovative, constantly challenging the limits of creative excellence.”

Moreover, only fifteen years after the brand was founded, Burger King has won a total of 76 awards at Cannes.

Okay – I’m at a loss to explain any of the awards for a brand with a freakin’ mascot that looked like this: 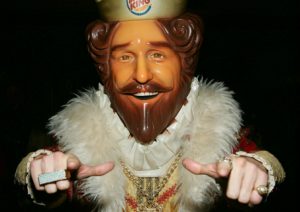 The only award they should have received was for dethroning that creepy king years ago.

It would also seem that Burger King has discovered the value of using sound in it’s advertising.

The article went on to say that the ad “also showed how audio, as much as visuals, is emerging as a critical branding consideration as voice-powered personal assistants like Alexa rise in popularity and so-called “hearables” — like smart headphones — enter the market.

A new Audio Branding Era? That uses sound? Why, that is genius! I wonder if radio stations the world over are aware of this incredibly powerful new era?

And the best part of this 15-second BK ad?! If you were one of the very few people that have Google Home and your TV on during the BK 15 second ad shown below, the end of the ad triggered the question, “OK Google, what is the Whopper Burger?”

At which point, Google Home, thinking it needed to answer the question did just that…..by Googling the answer on Wikipedia. Actually, whenever you Google a particular topic, the main answer in the top right section of the screen tends to be an answer from Wikipedia. And as we all know, Wikipedia is a free online encyclopedia, created and edited by volunteers around the world and hosted by the Wikimedia Foundation.

The key words here are “edited by volunteers,” meaning that anybody can change the text on a Wikipedia page. And that’s exactly what several pranksters did to the “Whopper” Wikipedia page! As a result, Google Homes started telling people the Whopper contains rat meat, toenails and cyanide!

Wow! Okay, I know that’s a lot to digest, so let’s review:

Burger King, home of what was once the world’s worst brand mascot, recently hacked its way onto Google Home, which told anyone listening that the Burger King Whopper was full of rat meat, toenails and cyanide.

Now that is creative genius worthy of all the awards it can get.