Lewis Gersh is well known on the marketing technology scene as an investor, and he’s placed several winning bets in that regard: Madison Logic, Indiegogo, Sailthru, and Tapad, to name a few. But the funder of startups in cross-channel marketing, personalization, and retargeting has left his full-time VC gig to run his own company.

What breakthrough digital technology would make the 48-year-old magic-maker leave the strategy room for the battlefield?
Programmatic direct mail.

PebblePost, for which Gersh serves as CEO, has secured a trademark on that term. He sees his digitally reactive version of direct mail as a billion-dollar proposition, a new channel that blends the scale of digital with the efficacy of direct to lift digital marketers to stratospheric heights of engagement. “Programmatic was sweeping through display, but it was getting overdone and efficacy was falling. PebblePost was born out of that,” Gersh says. “Everybody looked at anything but direct mail as a solution. But direct mail is second only to TV in marketing expenditures, and no new products have come out in direct mail for 25 years.”

"We're looking at multibillions in revenue.”

PebblePost launched last June on a promise of 8% response rates and 15% conversion rates. After its first five customers posted rates closer to 20% and 40% in those regards, according to Gersh, he knew he was on to something. PebblePost is run on an ad server that is activated by customer-determined hierarchies such as product segments. For instance, should a customer go to a retailer website, look at some shirts and blazers, and then leave without purchasing, a 4×6 postcard with an offer on an apparel purchase could be sent out to her within 24 hours of her visit. Of course, the retailer must have her physical address on file in its database. 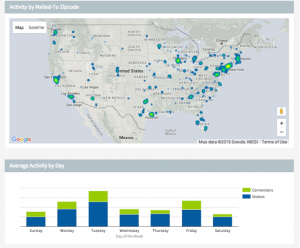 “We’ve built the first server connecting digital with direct mail,” Gersh maintains.”This was really enabled by the printing machine manufacturers. This is a cool extension of variable data printing.” Gersh now claims to have more than 100 brands engaged in real-time, reactive direct mail. One of them is Boxed, an online retailer of consumer packaged goods in bulk sizes. It is a true multichannel marketer, using Facebook, Instagram, email, and desktop and mobile display ads, as well as direct mail, for customer activation. Boxed sees itself as “Costco Online,” and since it’s often easier for customers to just stop by the warehouse club on the way home from work, the e-com has been focusing on re-engagement strategies. A good number of its customers have lapsed and it’s difficult to re-engage with them.

“We started testing PebblePost targeting our unsubscribe list. Many of them have unsubscribed in the past 60 days and have come back to the website but not made a purchase,” says Nitasha Mehta, senior marketing manager at Boxed. “Prior to PebblePost, we didn’t have a way to engage with them. It’s been groundbreaking for us.”

“One email sent is one impression, but one postcard sent is likely to receive several impressions among members of a household."

Mehta says that conversion rates via PebblePost have been running six times higher than those Boxed sees from emails. She says the company is still feeling its way around programmatic direct mail, but she thinks higher conversions might have something to do not only with the surprise factor of mail retargeting, but also with increased impressions for the postcards (above). “One email sent is one impression, but one postcard sent is likely to receive several impressions among members of a household,” says Mehta, who is currently preparing a March Madness themed PebblePost campaign.

A big differentiator between programmatic direct mail and triggered direct mail, says Gersh, is real-time metrics and campaign management. PebblePost users get a dashboard they can check on an ongoing basis to see the volume of mail sent, response and conversion rates, and return on ad spend. “You could never do this before on direct mail,” says PebblePost CMO David Cooperstein.

Both Gersh and Cooperstein say that programmatic direct mail remains in its formative stages and that more can be expected of it in years ahead, such as third-party access to physical addresses. As more customers come on board, PebblePost will continue to add breadth to the Address Cloud it’s constructing and validate addresses as specific users of clients. Then programmatic mail will shed its reliance on first-part day and users will be able to mail to unknown website users without taking ownership of their names and addresses. Of course, they’ll be able to capture them if they convert.

“We’ll have ownership of the address and won’t give it to the client. It’s like when someone does a search and clicks on a link for an item. The retailer doesn’t know who it is, though Google may know,” Cooperstein explains. Pebblepost’s reception in the marketing community far exceeded his expectations, Gersh says. Brand marketers love it, he says, because they can load it into their programmatic budgets, digital agencies see it as a natural extension of both programmatic and retargeting, and traditional direct mailers employ it as a way to eliminate some of the waste in an expensive channel.

“We have a product roadmap for PebblePost that goes out five years,” says Gersh, the digital era version of Victor Kiam, the former president of Remington Products, who proclaimed in ads that he was so impressed by its razors he bought the company. “We’re looking at multibillions in revenue.”